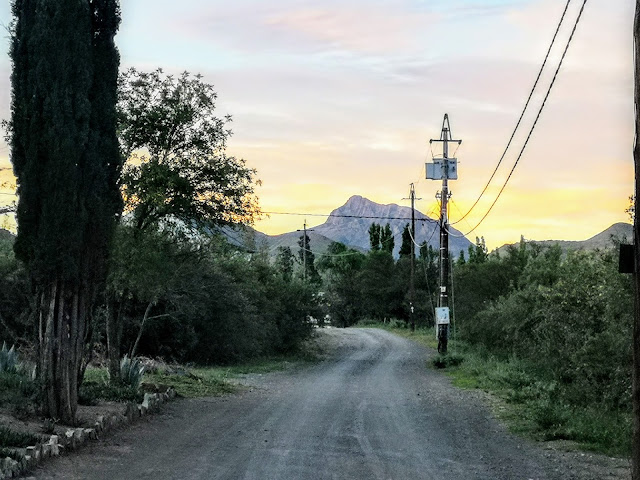 A week ago I sliced the fleshy tip of my right index finger on one of the plastic and foil blister packs encasing my meds.

That’s how I know that the first week of the lockdown has passed. It’s also why I’ve not gone mad: Without enough meds to last the lockdown I’d have been climbing the walls here.

I’m typing by the light of three candles.

It’s lush and green here. This summer has seen very good rains, this last week too; I know what the Karoo looks and feels like in a drought.

I’ve been here for exactly two weeks. Unplanned and in no way intended to preempt the shutting down of the country at midnight on 26 March.

By sheer and most fortunate serendipity I’ve been able to stay put in one of my ideal life geolocations, a place that inspires my heart to strum and sing.

When I arrived this time the poplars, which have always tugged powerfully at my heartstrings, were in their shimmering summer glory.

The last week has seen their gradual turning to autumn; I’m excitedly anticipating each of the tree's sharp, bright and passionate yellow transformation into trembling skyward flames.

These trees were the first image to be deeply burnt into my mind’s cornea when I first pilgrimed to here 22 years ago.

It was also autumn.

I was deeply in love, then. With two people simultaneously. And, somehow, in a relationship with both (it’s a long and painful story). And neither knew about the other. Well, for a while at least. I had no idea how to let either of them go. Because I was young, inexperienced and had not yet grown balls, nor integrity. Although now, and in hindsight, it’s obvious whom I should have held onto - with both hands and all of my heart.

Oh, for the wisdom and understanding that comes with hindsight.

Often planted as windbreaks along farm boundaries poplars make good screens and provide protection. My heart could have used some at the time. They’re especially striking when planted in clumps, which creates an atmospheric woodland effect.

The next time I came here, not long after the dawn of the millennium, I was in another relationship: dangerously enthralled by a cruel flame; in a deeply co-dependent space, my heart was a bruised and battered one. I knew that I get out. But how? A week later, knowing for my sanity what I needed to do, I drove out of this fertile valley with a heavy, dreading heart. While it what obvious what needed doing I needed, however, the evidence to underscore my instincts and suspicions before I could do it.

In spring and summer, the oval to diamond-shaped leaves of the poplar are shiny healthy green, with a pale silvery underside. While the leaves drop in winter, they are most striking in the autumn. That’s when they transform into a brilliant yellow that demands attention.

While poplars have long been symbols of courage, victory, fertility, youthfulness, abundance, protection and endurance, I’ve chosen instead to illustrate this post with a pic I took of the dramatic peak that’s visible from most of this village, while it was still legal to move around. Its name also oozes symbolism:

The Compassberg - the highest peak in the Sneeuberg range and resembling a compass needle towering 2 502 metres high - is near the village of Nieu Bethesda, 55 km north of the town Graaff-Reinet in the (my favourite) Eastern Cape Province. 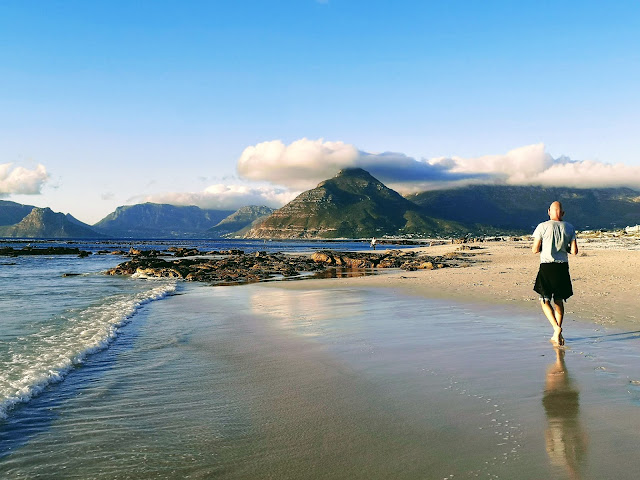 One day at a time.

I've so much time on my hands, suddenly.

Unable to focus though; as much as my mind spins around in circles so do I physically circle my apartment (living room to the kitchen to bathroom to bedroom and back), as well as scrolling through social media and the news sites, and reading the books I was so contentedly ploughing through just over a week ago. That was last week and in another world.

Now they, the books and most other things, too, seem unreal, and out of place. And, like many things before now, quite simply irrelevant.

Unable to focus and while I see, at least if I squint my eyes, that this time as a gift so as to get things, I can't get my sorry ass and mind to seat themselves at my writing

Got to walk for an hour on Kommetjie beach at sunset yesterday, to again breathe in deeply the ocean and fresh air, the exhilaration of the southern hemisphere ozone.

To, also, pretend that everything was just ok.

Tonight it's chilly, wintry and the South-Easter is raging, not unlike when everything was just ok.
Posted by Beautiful Mind at 22:08 No comments:

Self-love in the time of the virus 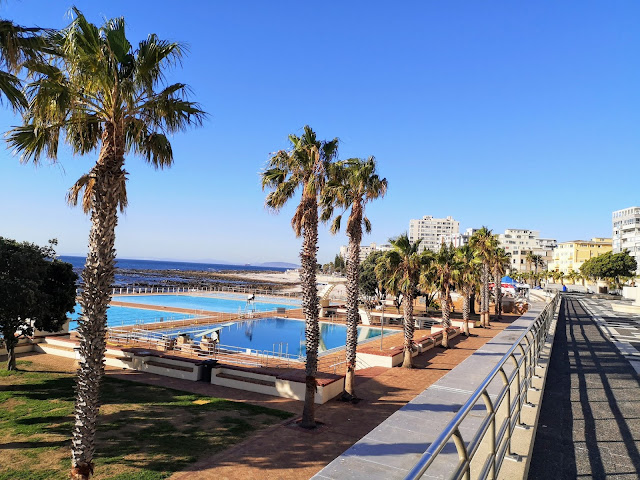 It's the quietest I've seen the Sea Point promenade, on Wednesday afternoon, a mere day after the City of Cape Town had closed down most public amenities because of The Plague.

The last time I experienced the public swimming pool empty, closed was during The Drought of 2017/18.

I'd decided to take the MyCiti bus from Woodstock at 4pm to Queens Beach, at the end of the 105 Sea Point route.

So as to get outdoors and to deeply breathe in the reek of the icy and plankton-rich Atlantic Ocean.

Not to mention the luxury of being able to see - unhindered by buildings, humans (except for the odd tanker or Robben Island on the horizon) - The Ocean.

To feel unconstrained by the city, knowing that I'm on its very edge; it's that definite line found almost only in ports, not in landlocked and seemingly endless cities like Johannesburg.

To bask, also, in the autumnal sunshine.

Especially as no one knows yet if the city, if the country, will be going into lockdown anytime soon; my guess is that it's likely.

I am, thankfully, rising again to the sunbeam-filled surface from the tentacles of the mental health issues that have been dragging me deeper and deeper into dark depths.

This while having my joie de vivre excruciatingly squeezed out of me, not unlike toothpaste from a tube.

Was increasingly difficult to motivate leaving my bed, never mind being in contact with friends, nor posting a single pic on Instagram for example; street photography used to be an endless joy.

The noose tightens so gradually that you're not aware of it, just as the temperature of the water in the pot is turned up so slowly that before you know your once lively, chirpy frog is cooked.

A visit to a Jungian psychiatrist for an hour on Monday, 2 March and an hour later my updated meds bought, swallowed, and down my throat.

That a mere chemical imbalance in my brain can so easily unhinge life. 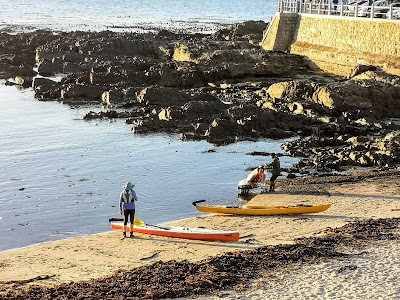 Three weeks later and life is dramatically altered. I give thanks.

(And cannot even begin to imagine what it must be like to be homeless with the triple burden of being on the streets, hungry, and disabled by depression and unable to treat it.)

Looking closely at the photo to the left, taken on the same walk, at Three Anchor Bay - where the suburbs of Sea Point, Green Point and Mouille Point merge - you'll see a  homeless man with his trolley burdened by all life's possessions, pushed into the shallow water.

Doing what I don't know.

Self-love and a healing process, like me?
Posted by Beautiful Mind at 12:30 No comments: 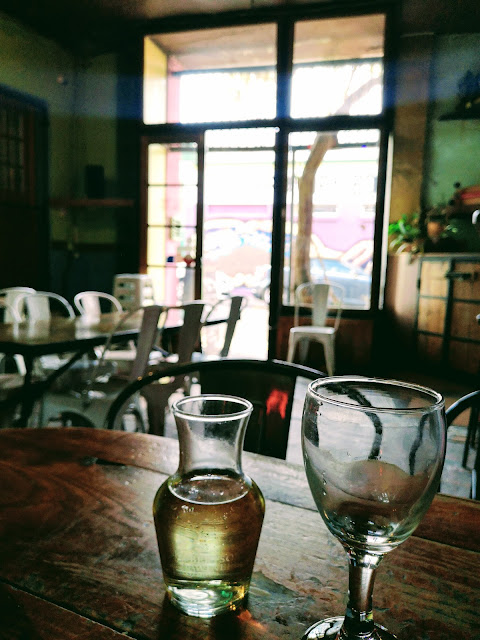 I've many places across the city that I visit, regularly, so as to match a mood I may or may not be experiencing. Normally (whatever that is) it's a place/space wherein I seek privacy and to enjoy the silence of my own company.  It's called recharging batteries. My challenge is that as I get older those baterries (of mine) require more charging than, when like a mobile device, I was 'new'.
Posted by Beautiful Mind at 16:33 No comments: 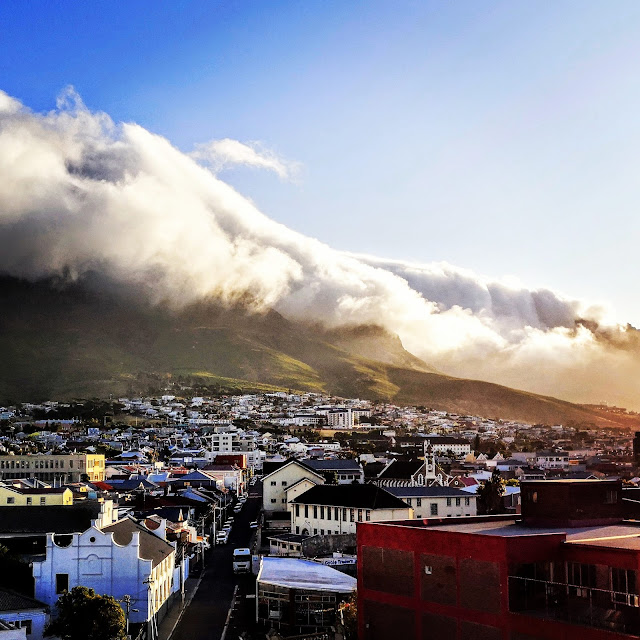 This is the image that has been persistently presticked to the wall of my mind this last week.

It's the sight from my writing table at home and across Woodstock of the South-Easter waterfalling metric tons of cloud over Table Mountain to the far right of the pic, and over Devil's Peak larger than life - in the left half.

It's also symbolic of my emotional state the last one and a half months of 2020; perhaps I should not have been in bed and asleep by 21h45 on New Year's Eve?

However, another name for the South-Easter is the Cape Doctor; I'm (mostly) the eternal optimist.

One word? Tumultuous.
Posted by Beautiful Mind at 16:40 No comments:

...how can i stand here
and watch the sunrise,
following the mountains
to where they touch the sky,
out of the vastness and the depths of the ocean, and to think for a moment
the point of it all is to make much of me?
because i'm just a whisper
and YOU are the thunder...

Poet Antjie Krog stressed that a writer should not concern themselves as to whether they are read or not, since “one writes so that you don’t die of shame, that you didn't say something when a girl is cut up somewhere in a parking lot and raped … You know that a poem will achieve nothing, but at least you will get through the night - André Naffis-Sahely

What is writing if not an exercise in recuperating memory? It is stopping to listen – of consciously being alive and attentive. Memory is the mentor of imagination, as stars are its vectors. The discipline of writing is also a great gift, a freedom – by writing one is gradually relieved of the sense of uniqueness of self. It is in many ways a liberating shuffle in the direction of humility - from a letter Dominique Botha had written to her parents to explain her thoughts behind the writing of her (2013) novel, False River

'Stray lines from Breyten Breytenbach’s Intimate Stranger about writers being the “scattered or lost tribe of the world” and how when they meet, they “recognize one another by a look in the eyes as if squinting against the sun, and by the clumsy gestures of hands.”' - Andre Naffis-Sahely in A World of Sharp Edges

German writer Heinrich Böll because he embodied that rare combination of political awareness, artistic creativity, and moral integrity which remains a model for future generations. The courage to stand up for one's beliefs; encouragement to meddle in public affairs; and unconditional activism in support of dignity and human rights were characteristics of the writer Böll.